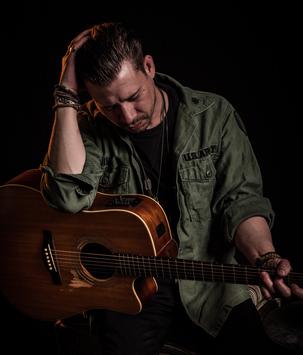 “I sing for the lost souls, the hopeless, the castaways, the misunderstood, the sad, the angry. Because I am them and they are me. That’s why I sing.” – Damian Sage

Damian Sage is a singer and songwriter based in Los Angeles, CA. A native of New York, Damian’s music is deeply steeped in the wisdom and experience of someone who has seen it all.
At the age of 12, Damian bought his first guitar at a garage sale for $5. The guitar had only two strings, but it was enough for Sage to learn a basic blues riff, and begin a musical journey inspired by the blues. It wasn’t long before Sage experienced blues in his own life, with homelessness and expulsion from high school leading him into a troubled transition into adulthood.
It was in music that Damian found solace, playing shows around the city wherever and whenever he could. This perseverant desire to play and to share his music and his world with others recently led the artist to follow his dreams to LA, where some of his favorite bands and artists had their start.
Damian’s music can range from to rock, to indie, to alternative, but it is always deeply and irrevocably rooted in heart. Damian’s heart for others who have struggled like him has inspired him to give his all to the communities around him, organizing charity events of his own accord to help touch people with his music, raise awareness, and ultimately to let the world know they are not alone.
A true diamond in the rough as an artist and an individual, Damian can always promise to deliver one thing this city and the world sorely craves:
In his own words, “I’m real, if nothing else.”